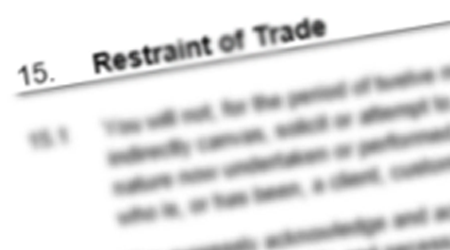 It is common to see a restraint of trade clause in an employment agreement or an agreement for the sale and purchase of a business. But what about independent contractor agreements?

Can an independent contractor be subject to a restraint of trade?

Businesses looking to protect their confidential information and client base will often insert a clause preventing independent contractors who provide services for the business from providing similar services directly, or through a third party, to an existing client.

These clauses (commonly known as “restraint of trade” or “non-competition” clauses) apply during the course of the agreement, and for a defined period after the agreement ends.

By comparison to the employment context, independent contractors are in business on their own account. The presumption is that they have some commercial experience and near-equal bargaining power and this context supports the restraint. Courts are more willing to uphold restraints where both parties are experienced commercial contractors. By contrast, where one of the parties is a lone independent contractor the Court may find there is an unequal bargaining position. This context would not support the restraint.

It is common in the health service industry for large organisations (such as ACC or DHBs) (“Organisation”) to tender large contracts. The successful tenderer (“Contractor”) then sub-contracts the actual work to health providers (“Sub-Contractor”) around the country.

Arguably, a Sub-Contractor could tender with, and provide services to, multiple Contractors, so long as the Sub-Contractor is able to perform the services for both Contractors and there is not a conflict of interest affecting the performance of services in either case.

This article should not be considered as specific legal advice regarding restraints of trade and non-competition clauses.  If you have any questions regarding this article, or you wish to seek advice about your specific circumstances, please contact the author at richard.gordon@gibsonsheat.com or on 04 916 7464.