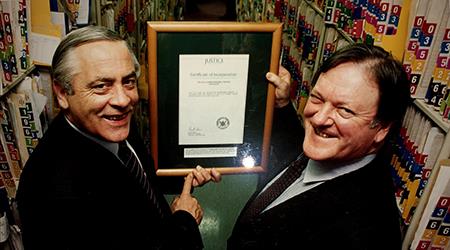 A tribute to a New Zealand icon

[Photo: Bill Sheat with Justice Minister Doug Graham in 1994, with the Certificare of Incorporation of the first Company IN New Zealand to be registered under the new Companies Act 1993, which came into force on 1 July 1994.]

The Gibson Sheat family mourns the passing of William (Bill) Newton Sheat on the on 20 January
2021.

We have proudly included his surname in all our firm names since 1957.

Bill started in the antecedents of this firm in 1953 and became a partner in 1957.

Bill’s tremendous contribution to the performing arts and film is legendary and well documented by
others.

Without re-documenting the extensive list of the organisations he headed and assisted during his
lifetime, just one or two of note should be mentioned.

Bill’s association with the Royal New Zealand Ballet began in the early 1950s and he became its chair
of 17 years later on.

Confidence in his abilities by the governments of the day resulted in his appointment to Chair of the
Film Commission and the Queen Elizabeth II Arts Council, as well as to other organisations.

He was associated with many organisations and trusts dedicated to the arts and their maintenance,
and to restoration of the theatres which they occupied or used.

Bill became a recognised expert in a number of disciplines within the law, including transport law,
copyright associated with the arts in particular, and in what was once known as town planning law,
now resource management law. His expertise in the organisation of trusts and incorporated societies
dedicated to the arts was well known.

He was formidable in every sense of the word; a staunch advocate for those he represented and assisted.

He held a practising certificate as a barrister and solicitor for 60 years.

Bill’s substantial contribution to the arts was recognised by his award of the OBE in 1973 and his later
his becoming a Companion of the New Zealand Order of Merit.

Bill was an able lawyer with a keen intellect. He was an intelligent and thoughtful man who was certainly not scared of the challenges of being a lawyer, nor those around funding maintenance and success of the arts and the organisations which ensured their success.

Bill was always generous with his time and was also an able and dedicated sounding board for many
of us in this firm, and we know outside of it. He was a true gentleman with ready good humour and
generosity of spirit.

He was a man who demonstrated passion for all of those things in which he was truly interested, and his application of effort and demonstrated ability to the causes and organisations who were the beneficiaries, has made him worthy of every accolade bestowed upon him.

Our firm owes a debt of gratitude to Bill and the profile he built for himself and us. He has left a legacy in relationships which still endures in this firm and in the continuing strength of it.

The vast store of knowledge which Bill possessed is now lost to us.

We are sad at Bill’s passing but enormously grateful that he was one of us. We celebrate Bill and his life and our association with him.