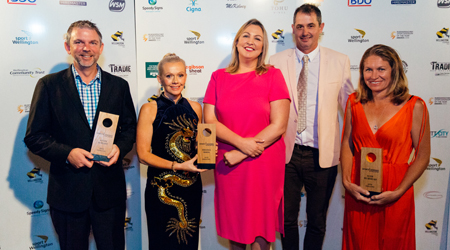 A busy time on the Wellington sport scene

June was a particularly busy month in the Wellington sports calendar, with a number of events taking place in which Gibson Sheat had an involvement.

Ahead of the French rugby test in Wellington, a number of representatives from Gibson Sheat and our guests attended the annual Centurions RFC lunch. This was held on 15 June and the 750 people present enjoyed a great event and also raised an amazing $18,000 for the NZ Rugby Foundation, in just over an hour! (The New Zealand Rugby Foundation is a charitable trust providing life-long support to NZ rugby players that suffer severe spinal injuries.)

A day before of the Sportsperson of the year function the new Gibson Sheat Sports Legends of Wellington were honoured, and their plaques unveiled at the ASB Sports Centre in Kilbirnie. This year’s deserving recipients were Melissa Moon, Suzie Muirhead, Stuart Davenport and Kevin Herlihy (posthumously). The legends, their families, and Keith Quinn attended a function in their honour.

Wellington Sports Person of the Year

On 20 June 2018 at TSB Arena, 840 guests attended the gala dinner and awards ceremony for Wellington Sports Person of the Year. It was a fabulous evening with great entertainment and an inspiring and humorous key note speech by gold medal Paralympic athlete, Cam Calkoen.

On 27 June Nigel Stirling was to attend the Parliamentary farewell for Paul Collins, who retires on 30 June after 9 years as chair of Sport NZ.